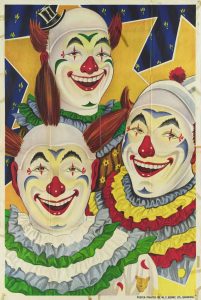 Nevada Governor Steve Sisolak, the party hack swept into power in 2018 on the back of the Democrats’ Russian Collusion hoax, has promised to keep Nevada closed as long as possible for the Democrats’ ScaryVirus election-rigging hoax.

Sisolak, who has a lifetime record of achievement as impressive as the average loaf of Wonder Bread, also says he would match up the advice of his fake doctor “medical adviser” with anyone else’s fake doctor any time.

This, my fellow Nevadans, is what we get for living in a fake state, a carny operation populated largely by cheap-labor fake citizens, all herded in to vote illegally by the Culinary Union while we look the other way.

The Carny in Chief has decided to fold up the big tent.  As he holds all power over the licenses for the milk bottle game and freak show, there’s not a damn thing we can do about it.

Before the age of TV, multiplex theaters, and Xboxes, there were traveling carnivals. The carnies would rent a lot on the outskirts of town, set up their tents and portable stages, poster the lamp posts all week, then skin the rubes for all they could get before packing up and moving on to the next sign of civilization. Carnies categorized all of humanity into two distinct groups — carnies and rubes. If you weren’t a carny, you were a mark, ripe for the picking.

Many books have been written about the carny life, most from the exposé perspective, revealing how the games were rigged and how the rubes were lured in, then cleaned out. Some have been written by carnies themselves, describing the hardships of the life and the us-versus-them mentality that pervaded their world. Whether you were running a ring-toss game, hawking beer and ice cream, or belly dancing in the “For Men Only” tent, if you were with the carnival, you were “in the life,” and carnies were your only family. It was all of you together against the rubes of the world.

Because of my lifelong interest in tricks, scams, games, and cons, I’ve read a lot about carnies. For most of my life, I’ve thought of the carny lifestyle in a sort of nostalgic way. I say “sort of nostalgic” because it wasn’t my personal nostalgia — I wasn’t there. It was a world and a lifestyle that existed for the most part before my time. Or so I thought.

Then I moved to Las Vegas.

Nevada has taken a lot of the hardship out of the carny life. We don’t have to pull up stakes every Monday and caravan to the next town. We’ve got the rubes coming to us!

This whole state was once one big empty lot on the outskirts of America. So, we set up our tents here, and we’re not moving. Why should we? Vacant lots this size are hard to come by. Besides, this is not your standard carny operation of half a century ago. We can’t just fold up and fit the whole kit and caboodle into half a dozen panel trucks. That Mirage volcano just doesn’t break down and squeeze into a few cardboard boxes so easily.

Every resident of this state is part of this carny life, and we all know it. We all understand that it’s us against the rubes, and we’ve got to keep the rubes coming, or we starve. We’re pretending to be a state of the union, just another one of the fifty united states, but we’re not really a state, and we all know that too.

You want to gamble? We got gambling! More gambling than you’ll find in the rest of the world combined! You can win millions! Come on in!

You want naked girls? We got more show girls and strip clubs per square mile than any six big cities combined! We’re just dripping with hot nubile flesh! Come on in!

You want to get laid? We got legal whorehouses all over the damn place! Our girls are tested weekly for VD, and there’s no pimp with a switchblade lurking around the corner, not to mention vice cops to bust you! There ain’t no vice in this state, so come on in!

You want to get wasted? Hey, this ain’t California where the bars all close at two a.m. There ain’t no clocks in Nevada, and we don’t prosecute drunk drivers! The whole damn state is shit-faced, so come on in!

The Inviolable Rule of Any Successful Carny Operation

Now, the inviolable rule in any successful carny operation is that the carnies take care of their own. For example, many Vegas night clubs and strip clubs give locals free admission and big drink discounts, so card-carrying carnies can get buzzed on the cheap.

You think all those coupon books with half-price show tickets and 2-for-1 buffets are for the tourists? Think again. Half the people who live in Vegas have never even been to a grocery store. And every casino has a break room where the dealers, waitresses, keno girls, and pit folk can all eat for free. The rubes pay the bills in this town!

There ain’t no state income tax in Nevada. Our highways are maintained and our teachers are paid by the millions of bucks the rubes drop in our con games. People who move to Nevada from real states soon discover the benefits of being a carny. Free food. Free shows. No taxes. Just a never-ending supply of rubes with loose money.

But Nevada? What’s our industry?

We empty the wallets of everyone who visits here from all those real states.

Grift is all we’ve got, and now Sisolak has shut it down!

Sisolak first moved to Las Vegas in 1978, when the city was still run by the mob. Now he’s a loyal soldier of the DNC organized crime syndicate, which extorts multibillion-dollar kickbacks on U.S. foreign aid from places like Ukraine, shakes down U.S. banks for payola under the guise of protecting consumers, and allowed Jeffrey Epstein’s pedophile ring because he had them all on film.

Now, you don’t have to be a Republican to be appalled by what’s going on here. I’m a political cynic. I realized long ago that politicians are murderers, rapists, thieves and thugs.

Sisolak is an alleged wife-beater and thug so he fits the governor job prerequisites perfectly — elites pick criminals and deviants for office because they can be controlled. I’ve never voted except strictly as a favor to my wife.

So I find there’s a grim amusement to be had in watching Sisolak bust out this state and destroy all the people who voted for him.

I honestly don’t see how Nevada will survive Sisolak, who will smother the tourist industry here either until the election or until he’s absolutely sure it’s stopped breathing.  Nevada wages are notoriously low, as carny wages have always been, so unemployment compensation, even at the ScaryVirus fed-supplemented level, won’t begin to cover what workers here have lost in free meals, tips and the like.

And there are an estimated 100k workers in Vegas in the gig economy (not counting all the shut-down small businesses). They’ve all been laid off since at least March 16 and although it’s been three weeks since the feds approved and funded unemployment comp for them, Sisolak hasn’t gotten around to updating Nevada’s application form yet. So none of them can get the money.

Plus, we’ve been putting working people back in new houses in Las Vegas at the fastest rate since the peak of the last housing bubble. Just a little more of Sisolak’s mandatory shutdown, and we’ll be in the throes of yet another housing crash.

I’m at the point in my life where I’ve got enough money to ride this out. I’m going to watch the sinking of Nevada from a safe perspective, like a guy on a lifeboat watching the Titanic go down and listening to the screams.

What makes it hard is that I have so many friends who are stuck on the sinking ship. So many people who are in the process of losing everything they’ve worked for their whole lives.

And honestly, the Titanic was fun. I enjoyed playing blackjack and poker here. I loved going to the world-class Vegas strip clubs. I saw Little Miss Nasty three times and was never bored.

I loved the restaurants, with the top chefs in the world creating every kind of cuisine. I milked the 2-for-1 buffets with the best of them.  I will miss it all.

Now it’s time to put my face mask on and go stand in line at Costco with the rest of the carnies. Sure hope they got a load of toilet paper in.

Parts of this post are adapted from my 2002 Blackjack Forum essay for card counters, Hey Rube!  Las Vegas Welcomes You.