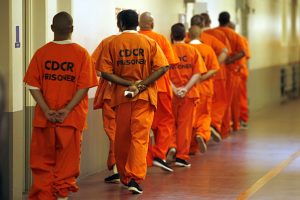 People who brainwash know that physical control of a population is impossible without the cooperation of the population. To control a population, it’s essential to manipulate the minds and feelings of the people, who then become psychological prisoners of the brainwashers.

This post will show how torture and mind control techniques have been used against us as part of the coronavirus phenomenon.  It’s been used to gain our consent for our own economic destruction and home imprisonment to influence the November elections.  It’s been used to weaken our resistance to a radical left political agenda.  It’s being used to corral us into supporting huge Big Pharma profits from vaccines and treatments like Remdesivir, which don’t work.

Amnesty International’s Report on Torture describes the process used to break the will of a prisoner of war:

Isolation cuts people off from social support.  No church for you, no meet-ups with friends at the club, no camaraderie at work because your office is shut down, but favored groups (Democrats) can meet up by the thousands to dance, chant, hold political rallies and riot whenever they want.

Monopolization of perception keeps people focused on their immediate predicament and frustrates all actions except compliance.  We are locked down at home with nothing but TV and social media, with all entertainment and news options controlled by a handful of Democrat elites, who broadcast only Democrat propaganda.  On Facebook and Twitter, posts and videos by scientists and doctors that counter the Democrat narrative are banned.

Induced debility is simply about wearing you out through stress, fear, and the need to rush about to meet new demands.  Daily we are bombarded with scary (false) death statistics and case numbers, hoaxes about children dying from WuFlu, employers demanding testing as a condition of employment, videos from China on social media of people collapsing in the street, and Big Pharma shills lying about cures.

The fact is, even if you’re in a high-risk category, Chop Fluey is high preventable without masks or lockdowns, and if you screw up and don’t prevent it, it’s highly curable unless you have government officials like my governor banning the cures.  Dr. Thomas Borody says, “We know it’s curable; it’s easier than treating the flu.”  Dr. Zev Zelenko recommends a regime of hydroxychloroquine and zinc.

But if you can’t get hydroxychloroquine (most of us can’t), he says over-the-counter quercetin and zinc will work almost as well.  Dose for prevention is 500 mg quercitin once or twice a day, plus 25 mg elemental zinc once a day.  Don’t let them induce debility in you by denying you effective treatment until you’re hospitalized.

A recent poll of American adults shows they believe 9% of the U.S. population has died from Covid.  I’m not, in this post, going to get into the evidence that NO ONE has died of Covid.  But even using the CDC’s death numbers, which are badly compromised by higher hospital reimbursement rates for Covid patients, the death rate for those under age 60 is 0.004%.  That’s 4 per 100,000 people who catch it.  That’s just 4% of the death rate of the common flu, which is 0.1% or 1 per 1000 people who catch it.  It’s down there with the death rate of the common cold.

How did Americans come to believe 30 million Americans had died of Bat Plague?  Monopolization of perception to induce stress and fear.

The rush to meet new demands to induce debility has been obvious.  It suddenly takes multiple trips to six different grocery stores to pick up supplies for a week, where it used to take one trip to one store.  Long-term Las Vegas residents who were renting motel rooms by the week or month were suddenly homeless when the governor shut motels down.

Your dentist is shut down by government mandate, so you have to visit an oral surgeon 18 miles further away to deal with a simple toothache.  You can’t afford the gasoline to get there because your job is shut down and your unemployment benefits still haven’t arrived, or you still have hoops to jump through in your application for small business aid.

Threats are punishment designed to enforce compliance.  For example, we’ve seen videos of cops putting young girls in choke holds for failing to wear a mask properly.  A gym or barber that reopens in defiance of shutdown orders loses its business license.  A church that reopens has its electricity and water cut off.  A passenger who refuses to wear his mask on a plane is dragged off the plane.

Occasional indulgences are a training aid, like treats for a dog who comes when called.  In my state, the governor reopened bars only to shut them down again after two weeks.  In casinos, we were allowed to go mask-free while having a drink; now masks are required to be pulled up between sips.

We were allowed to enjoy public pools for a couple of weeks; now you’re required to wear a mask at pools unless you’re actually swimming, despite occupancy rates being limited to 25% and strict enforcement of 6-foot social distancing.

The people behind the Bat Plague hoax fully intend to turn us into slaves.

The brainwasher seeks to demonstrate omnipotence to show you the impossibility of escape.  In Nevada and other Democrat-run states, the authorities have implemented snitch lines and webs of secret “compliance agents” looking for minor infractions of the latest mandates and issuing harsh penalties for any they find.

Degradation is about weakening your own sense of competence and ability to cope on your own.  It’s about making you dependent on your captor or abuser.  You can’t talk to your doctor about using hydrxychloroquine as a prophylactic because the FDA has banned it for outpatient use.  Instead, you have to wait until you’re hospitalized to get HCQ, when it’s most effective if you take it early.

In Las Vegas, competent and creative parishioners of a church rented space in a casino to hold services, because in casinos the permitted occupancy rate is 50% while in churches the limit is 50 people no matter how large the church’s space.  But the Nevada governor fined the casino for allowing the church to hold a service, even though those attending didn’t exceed the number allowed under the 50% occupancy rule.  The Nevada governor demonstrated that he can violate his own rules at will to take away your ability to cope on your own.

Enforcing trivial demands reinforces your sense of helplessness.  Over 100 studies, including the CDC’s largest study on the subject, show that masks neither stop nor reduce disease transmission rates.  They don’t even stop transmission to patients from surgeons wearing them in operating rooms.  Yet the Nevada governor’s snitches are out getting businesses fined or shut down if they find anyone inside without a mask.

Meanwhile, the American Dental Association has warned that prolonged mask wearing is not only causing funky mouth diseases, but increasing your risk of stroke.

There is no evidence whatsoever that 6-foot social distancing is more protective than 3-foot social distancing or no social distancing at all.  It takes prolonged intimate contact to transmit the disease, not casual contact at a gym or Home Depot.  But in the Sahara Casino in Las Vegas, some guests were standing less than 6 feet apart to observe some table games.  Even though they wore masks, the Nevada governor’s snitches ratted out the casino and Gaming Control filed a complaint.

Sahara’s management is now groveling but the casino could lose its gaming license.

Democrats and their allies in the government bureaucracy and media are also using classic MKUltra techniques to break the will of Americans to resist their radical agenda.  You can read more about that in my post on the Bat Plague hoax and Project Artichoke.

To recap, Democrats are using brainwashing and torture techniques to break down the will of Americans to resist their radical agenda.  And there is no doubt they have conspired with China in this assault on us.  China started the psychological warfare against us with an army of agents on social media pushing the phony videos of people collapsing on the street, bodies stacking up in ERs, and authorities welding shut the doors of apartments towers with residents inside.

It never happened.  China has absolute control over social media in China.  The Chinese Communist Party was supposedly trying to stop info from getting out on the virus, yet on social media there were 100s of these videos.  That’s a tell.

It was also a tell that people broke their falls while collapsing on the street.  And some people fell like a sack of potatoes, while others went super rigid and screamed.

It was all fake.  It’s still all fake.  Fake news is the enemy of the people.