The murder of Aaron “Jay” Danielson by Portland Antifa terrorists Saturday night was carried out by a well-organized, well-trained death squad of about a dozen operatives that included a shooter, two spotters, a model, a photographer, two cameramen and others whose job it was to clean up the scene before police arrived.  The operation likely also included two Portland cops.

There are multiple videos of the murder; the murderers had no concern whatsoever about hiding their crime even though there were police watching from less than a minute away.  Police were literally at Jay’s side within 40 seconds of the squad signaling Jay was the target.

The entire death squad wore white socks to the event, apparently so it would be easy to keep track of each other at night.  Antifa-BLM members don’t normally wear white socks with their black “uniforms”.  The killer also wore a white jacket or shirt, so that the entire squad could see him at all times.

Here is the transcript from those videos.  It was put together by @cosweda on Twitter.

Female voice: “Knocked him off!”

That’s five working together on the death squad so far.  There were more involved to survey the scene after the event for evidence and delay, distract, and give disinfo to any honest police and EMTs, as well as the media.

For example, a member of the op was perfectly placed and ready to photograph an Antifa “medic” rushing in to save Jay.  She says, “I’m a medic,” and pulls out a first aid kit from CVS.  The “medic” lists herself as a model on her Twitter account.  The propaganda photo (below) was sold to Getty Images within an hour and made it into major newspapers. 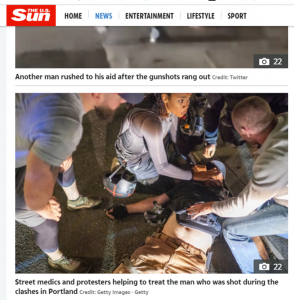 Former National Security Council Director Rich Higgins points out that the two people who filmed the murder were in on the operation as well.

Cameras right and left were both part of the op.

Both had prior knowledge of exactly what was coming.

Remind anyone of other terrorist organizations?

As the hit squad walks close past one of the cameramen, he carefully pans down to the pavement to avoid recording their faces.  Then he turns around and follows them to the place of the hit.  At 3:55 in this labeled video, a second before the murder but seconds after the signal has been given, you can hear the cameraman say, “I’m really kinda scared.”

The Democrats’ Antifa death squad started out split in two, on opposite sides of the street, scouting for a target to kill.  The scout at the head of one of the columns identified the victim, and the gunman murdered him without hesitation. From the first “Move! Move! Move!” to the gunshots was seven seconds.  The hissing sound was Jay Danielson using a chemical spray as he was approached.  He was afraid.  You can see the white cloud from the spray in the video.

After the gunshot, a black Charger runs the red light and pulls up behind the murdered man.  The Charger contains the narrative control team and fake medic.  They use a flashlight to find and remove spent bullet shells.  The cameraman then speaks and says, “I’ve got mace in my eyes.”  He has had no other reaction to the shooting.  No emotion.  No jerk of surprise.  No rushing to the victim.  He just keeps filming.

Police arrive.  A passerby urges the cameraman to turn in his film to the police as evidence.  The cameraman says, “Nah.  I’m dealing with it.”

On one of the videos, the people who got out of the Charger can be heard clearly giving police false info about a red car driving away. They were right there for the shooting, coming through the red light. They knew there was no red car.

The alleged murderer, Michael Reinoehl, had been arrested on gun charges at Portland riots in both June and July, but was released immediately both times, without bail.  Then he was arrested again for his involvement in a melee on July 26, where he got shot in the arm.  But no charges were filed against him then either.  He was also in the crowd of Antifa-BLM terrorists that kicked Adam Haner in the head on August 17th and knocked him unconscious after he tried to defend a transgender woman.  No charges for Reinoehl then either.

The killer has said, “This is a war, so there’s going to be collateral damage.”  But this wasn’t collateral damage.  It wasn’t an accident.  It was a deliberate, preplanned hit.  The murderer is still at large.  It seems clear to me that city and county officials are protecting him.  The campaign of the county DA was funded largely by George Soros.

Jay Danielson, a Portland resident, was a member of Patriot Prayer, a conservative Christian group.  His companion said he was there to “provide security” for a pro-Trump car parade.  He wanted to stand up to these terrorists, not allow them to silence voices on the other side.

That’s because most people still don’t realize we’re not dealing with a normal election. Jay didn’t realize Democrats had reached the point where they were looking for targets to kill.

Jay’s companion said he had no idea what was happening until his friend was already dead.  The media tried to label Jay a far-right armed terrorist, but this claim was so far from the truth that Acting Homeland Security Secretary Ken Cuccinelli weighed in and said it was defamation.

I’ve linked to this before, but if you haven’t read it already, you might want to read about the Ukrainian neo-Nazis imported by John Br3nnan under the Dreamer Act to beef up Democrats’ Antifa-BLM insurrection forces.  At least some of the people recruited took part in the Maidan Massacre.

Former NSC Director Rich Higgins has warned there’s a national security emergency going on in the United States, literally a Democrat insurrection that is using the election as cover.  See this post on Democrats’ election plans for more information on the insurrection.

There were reportedly undercover federal agents in the crowd the night of Jay’s murder, but nobody official or in the media has said that yet.  Trump did say to the press in Kenosha this morning that Jay had been targeted.  He repeated it several times.

Update:  Just got a report that there is evidence that there were professional arsonists involved in Kenosha, where the black business district was burned down.  Feds are investigating.  Will try to write up a post soon.